Today is the anniversary when the EU Roam Like at Home Regulation came into force enabling end-users benefiting from the abolition of roaming charges when travelling to another EU/EEA country. According to statistical data collected by the Malta Communications Authority (MCA) and Body of European Regulators for Electronic Communications (BEREC), this contributed to a substantial increase in the usage of roaming mobile services by local users especially in the case of voice and data.

The use of mobile technology in everyday life has become an important aspect of the modern society and the implementation of the Roam Like at Home is allowing end-users subscribed to operators in Malta travelling in EU/EEA countries to feel more at ease when using mobile services without the concern that they might be receiving a bill shock at the end of the month.

Although in the vast majority of cases, end-users are charged the same retail domestic price for making a call, sending an SMS or using the internet, it is always advisable for the end-user to check with his/her service provider before travelling. One need to keep in mind that whilst roaming, calls made to the same network are charged at the same rate as if end-users are calling someone on a different network when in Malta.

For more information on the Roam Like at Home kindly visit www.mca.org.mt/rlah 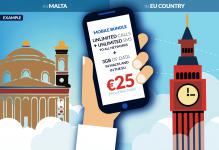