The Digital Economy and Society Index 2018 (DESI) published by the European Commission has confirmed Malta’s position as the best performing country across the EU in the field of broadband connectivity. This index is an online tool to measure the progress of EU Member States towards a digital economy and society and assesses five main indicators: Connectivity; Human Capital; Use of the Internet by EU citizens; Integration of Digital Technology by the business community; and Digital Public Services.

Malta also remains a European leader on the availability of fixed broadband, being the only Member State with full coverage of ultrafast networks, with subscriptions to such services growing year-on-year.

Malta has also improved its standing in terms of the number of internet users, which is reported at 79%, bringing it only 2 percentage points away from the EU average. Furthermore, basic digital skills improved substantially to 56%. In 2017, a large number of activities were launched in this area by the Malta Communications Authority (MCA). For example, the MCA, together with the Parliamentary Secretariat for Rights of Persons with Disability and Active Ageing launched the Ċavetta Diġitali initiative, a new ICT training programme targeting 2000 senior citizens from day care centres and residents in Government elderly homes.

Although the number of internet users is slightly behind the EU average, the users that are online are more active than EU counterparts. 87% of Maltese internet users are highly active on social media networks, ranking first across the EU. Interestingly, Maltese businesses are also strong in the use of social media and the use of advanced Cloud Computing services. The number of Maltese users engaging in online banking and video call facilities are also in line with the EU average.

Malta has been ranked 12th  overall out of all the 28 EU Member States. 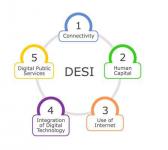