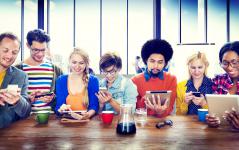 Data Report Sheet (DRS) with the latest figures is published.

The MCA has today published the Data Report Sheet (DRS) with the latest figures for the sectors of electronic communications and post, covering the period Q1 2014 to Q1 2018.

Rising demand for fast and ultra-fast download speeds is driving subscriber growth in this segment, with the proportion of subscriptions getting these ‘headline’ speeds increasing from 63.7% at the end of March 2017 to 80.8% at the end of March 2018.  The continued rise in fast and ultra-fast fixed broadband subscriptions contributed to a rise in ARPU.

Voice traffic minutes for mobile telephony were up by 7% in Q1 2018 compared to volumes recorded in the same period a year earlier. On the other hand, SMS volumes were down by 14% during the same period.

In line with the MCA's efforts to add value to our publications, the DRS publication will from now onwards include information about the take-up of leased lines at retail level.