Since coming into force in June 2017, the principle of the `Roam Like at Home` which was established in the Roaming Regulation, has put an end to retail mobile roaming charges in all EU/EEA member states. The basic principle of the 'Roam Like at Home' is that consumers can utilise their domestic volume allowances or pay domestic prices for voice, SMS and data consumed when they are periodically travelling in the EU/EEA countries.

National regulatory authorities such as the MCA, are tasked to regulary collect roaming data from local telecom service providers. This information is then published in a statistical report by the Body of European Regulators for Electronic Communications – BEREC.

Earlier in March, BEREC published the latest 'International Roaming Benchmark Report‘ which presents the results of this roaming data, covering the period from April to September 2021.

The Report demonstrates a partial recovery of the roaming market from the COVID-19 impact, with the increase in travel and roaming services usage by subscribers. Neverthless,  the number of these subscribers utilising roaming services is still less than the pre-pandemic period. On the other hand, the average data roaming consumption per subscriber has continued to increase.

Data illustrates that on average, Maltese subscribers made and received around 20 roaming minutes per month whilst the usage of SMS stands at around 2 roaming messages per month. As for the use of roaming data, the average Maltese monthly consumption is around 1GB.

Graph below illustrates that the percentage of subscribers that used roaming services in the EU/EEA was on an upward trend for two successive quarters, but the amount was still below the pre-pandemic numbers. 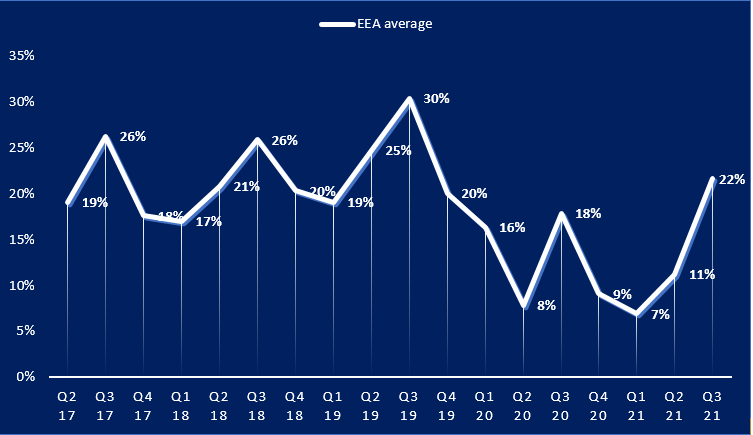