The 6th edition of the Malta Communications Authority’s (MCA) eBusiness Awards was held on Tuesday 11th April, at the Mediterranean Conference Centre, Valletta.

These awards have become an important annual appointment in the ICT calendar of activities in Malta and are aimed at showcasing and encouraging new ideas and best practice in the eBusiness sphere as one of the key drivers of the Maltese digital economy. 26, out of a record 55 nominations made it to the finals across the 8 categories awarded on the night. 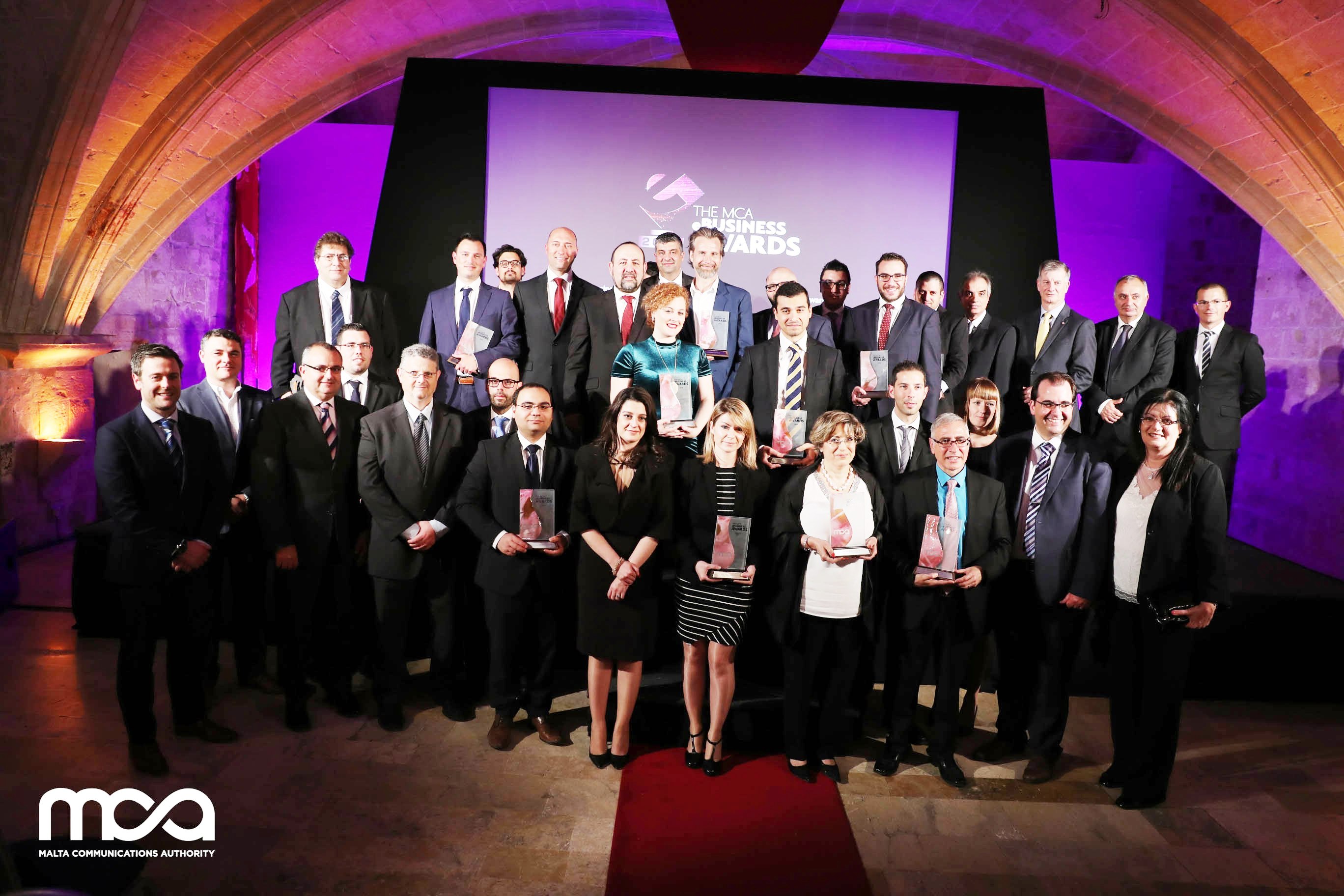 Jobsplus.gov.mt, a digital solution developed by ICON and aimed at modernizing the way job seeking is undertaken won Best eGovernment Initiative. The Best App category was won by ‘Tallinja’, an App commissioned by Malta Public Transport and developed by Alert Communications. Shireburn Software won the Best Business-to-Business category for its Shireburn Indigo Payroll, whilst the Best Business-to-Consumer award was won by MaltaPost for its SendOn and Easypik solution, which was developed by Ascent Software and Swipbox AG. Daniela Bartolo won the award for her study titled ‘Malta’s digital economy: developing connectivity for a small EU Member State’ as part of the Best ICT Academic dissertation with an eBusiness theme category. The Best Tech Startup award went to The Student Campus. New York Best won Best Social Media Campaign for its campaign developed by ANCHOVY. This year’s winner for this particular category was selected through 50% public voting. Another novelty for this edition was the final award of the night, the award for Best Use of Technology in Business Transformation. Presented by the Hon. Dr Emmanuel Mallia, Minister for Competiveness and Digital , Maritime and Services Economy, this award was won by the Pharmacy of your Choice for its ‘Beyond’ an ERP Solution’, which was developed by PTL Ltd.

During his closing address, Minister Mallia stated that ‘the solutions presented during these awards are indicative of a growing tech-ecosystem.  The knowledge economy continues to establish itself as a major driver of our economy and an important contributor to Malta’s economic successes.’ ‘Without reservations, the ICT sector deserves all the support that the Government can possibly give in terms of infrastructural backing,’ continued Minister Mallia.  ‘For a small nation like ours, the ICT industry has even greater relevance. Besides deriving efficiencies across a wide range of vertical sectors, it is also the driving force behind growth and innovation in emerging economic pillars - from modern health services, to novel methodologies in education, to opportunities in the cloud computing sector to the commercialisation of orbital satellite systems – in a nutshell, it is hard to think of a commercial or civil activity in which ICT is not the underpinning currency,’ he concluded.

Dr Edward Woods, Chairman at the MCA lauded the record number of nominations received for this edition and acknowledged that this was a direct reflection of both a vibrant local ICT sector, as well as an indication of the high profile that the MCA eBusiness Awards have acquired in the ICT ecosystem during the last six years. Dr Woods also stressed the importance of eBusiness in today’s growing digital economy and commented on the Authority’s efforts in encouraging local SMEs and microenterprises to adopt eBusiness as part of their business model.

The award ceremony was hosted by Ian Busuttil Naudi and Rachel Cachia, presenters of the popular TV programme Gadgets. GO and Melita sponsored the event.

More information on the winning solutions is available here.

An audio-visual clip capturing highlights of the awards ceremony is available here.