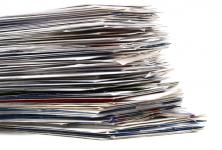 The Malta Communications Authority (MCA) is today publishing the results of its biennial bulk mailer perception survey. As in previous similar surveys 40 face-to-face interviews were carried out between November 2018 and January 2019 with the person responsible for the handling of mail within each organisation.

Eligible respondents who participated in this survey had to have used Malta Post’s Bulk Mail Service to send an average of more than 750 addressed letters in a year.

The following is a synopsis of the salient outcomes that emerged from this survey.

The majority of respondents (81%) have reported high levels of satisfaction with the overall quality of MaltaPost’s postal services, representing a 6% increase from 2017. Consistent with this high level of satisfaction is a 93% response rate for bulk-mailers who have never lodged a formal complaint with MaltaPost.

The Average Number of Bulk Mail Items Sent per Year

There were no notable changes from last survey (2017) in the volume categories of the letter mail sent with the exception of an 18% drop in the bracket between 100,001 and 500,000 letters sent.

Intention and Expected Future Use of the Bulk Mail Service

The vast majority of respondents (95%) have declared their intention to continue making use of the Bulk Mail Service in the next 12 months following this survey. Whilst 58% of these respondents have anticipated no change in the volumes of letters sent, 20% were envisaging an increase.  Meanwhile, 18% of the respondents are anticipating lower volumes.

Reasons for the anticipated Increases and Decreases

Half of the respondents (50%) expecting an increase in the use of the Bulk Mail Service over the next 12 months have cited business growth, in terms of a greater client base and the setting up of new establishments, as the main drivers of the increases.  An anticipated increase in the volumes of printed bills will account for 40% of such increases whilst 20% of the respondents will be expecting an increase in their marketing campaigns. Respondents who have claimed to be anticipating a decrease have attributed email communication as a prime alternative to bulk mail followed by online platforms, social media and messaging services / voice communications.

Frequency of Use of the Bulk Mail Service

There was a similarity between the 2017 survey and the present one in the number of respondents who used the bulk mail service on a daily and weekly basis (20% and 38% respectively). There was however, a drop from 23% to 8% of those respondents who have claimed to be making monthly use of the service. Another decrease (from 13% down to 5%) was recorded in the proportion of respondents making use of the service every 4 to 6 months. A three-fold and two-fold increase from 2017 was recorded in the number of respondents that used the service every 3 months and bi-weekly respectively (from 5% to 15% and from 5% to 10%).

There was an increase from 30% in 2017 to 48% in 2019 in the number of respondents who expressed satisfaction at the price levels, which were prevalent at the period the survey was conducted ( November 2018 – January 2019) whilst 40% expressed that current prices were neither high nor low (neutral). Finally, 13% considered the prices of bulk mail to be unreasonable.

The number of respondents who would not consider shifting to an alternative non-postal service if there was a price-hike of up to 10% in the Bulk Mail Service increased from 28% in 2017 to 55% in 2019. The number of respondents who would consider switching to email was down by 15%, from 53% in 2017 to 38% in 2019, whilst marginally more than a quarter (28%) would shift to an online platform.

Only 18% of the respondents would find the reduction of service availability from 6 to 5 days (i.e. the clearance and delivery of bulk mail items) a major inconvenience, which is consistent with the finding that 89% of respondents would be unwilling to accept a price increase in order to maintain a 6 day bulk mail service.

40% of respondents would consider a 3-day deferred delivery against lower prices whilst 35% would not consider such trade-off as a viable alternative. A quarter of the respondents would consider the deferred period, depending on the urgency. There were no notable shifts from 2017 in what was considered as an acceptable lead time, whereby more than half the respondents (55%) prefer a next-day delivery whilst 38% consider 2 days as an acceptable lead time.

Kicking –off the process of sending bulk mail

The majority of respondents (65%) drop off the mail at MaltaPost’s head office whilst 18% have their mail collected from their premises. A further 20% are split in equal proportions between respondents depositing the mail at a local post office and a mix of the previous two options (drop-off and collection).

As regulator for postal services, the Malta Communications Authority (MCA) carries out research on a regular basis. This survey, part of a series of surveys examining household and business use of postal services, is intended to assess the extent of bulk mailers’ satisfaction with the services provided by MaltaPost, as well as to monitor a number of aspects related to postal services (such as price levels, quality and access). The aim of this research is to guide the Authority’s decisions, the effects of which are felt by consumers and businesses alike, by providing an additional source of information for such decisions.